The following chapter focuses on the technical specifics and implementation details of TrustZone-M on a STM32L5 microcontroller. Chapter 10 accompanies this chapter and shows example firmware implementations on a STM32L5.

The cheapest development board with TrustZone-M support I could find was the NUCLEO-L552ZE-Q, which is powered by a STM32L552ZE microcontroller by STMicroelectronics. The hardware:

The evaluation board provides:

For the rest of this chapter I am going to refer to the evaluation board as Nucleo, and when I mean explictily the microcontroller I use STM32L5.

Most of the values (memory regions,…) you will see in the next chapters are configurable by the user. I’ll use example values.

The life cycle of a product, which contains a STM32L5 as a component, can be a hugely complex: After STM produced the STM32L5 there might be multiple vendors involved to assemble, initialize and provision the final product, before it is sold or delivered to the end user. The product might return to the vendor for Return Material Analysis or might be decomissioned. Different stages of the life cycle have different security requirements. For example, the original vendor might want to program the secure world of a device (e.g. to ensure it’s identity by storing secrets in secure world), but having the provisioning of nonsecure world outsourced to any other vendor.

The different security requirements of each development stage are reflected by Readout Protection (RDP) on STM32 devices. Different STM32 devices have different RDP levels with different features enabled or disabled per level. Transitioning between these levels is only possible in a predefined way. STM32L5 microcontrollers have the following RDP levels: 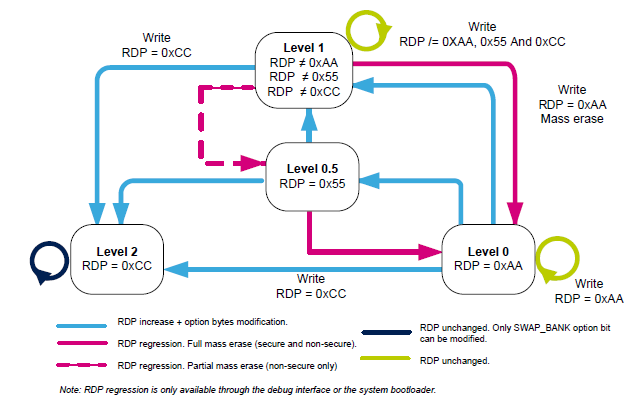 To set the configuration bytes, the board must be plugged in and connected. To successfully connect to the board, the ST-Link drivers and the STM32CubeProgrammer (see chapter 10.1) need to be installed.

See chapter 10.2.1 for an example how option bytes are configured using the STM32CubeProgrammer.

In chapter 4.5 a high-level segmentation of the address space applicable to Arm6-M, Armv7-M and Armv8-M was introduced. The STM32L5 actually respects this Arm recommendations:

Some more details on the PPB can be found in chapter 4.5.

When TrustZone (TZEN=1 option byte) memory is either attributed as secure (S), non-secure (NS) or non-secure callable (NSC).The STM32L5 has one IDAU, which is used to further subdivide each of the regions from table 9.1 and attributes them to either NS and NSC areas, as you can see on figure 9.2. 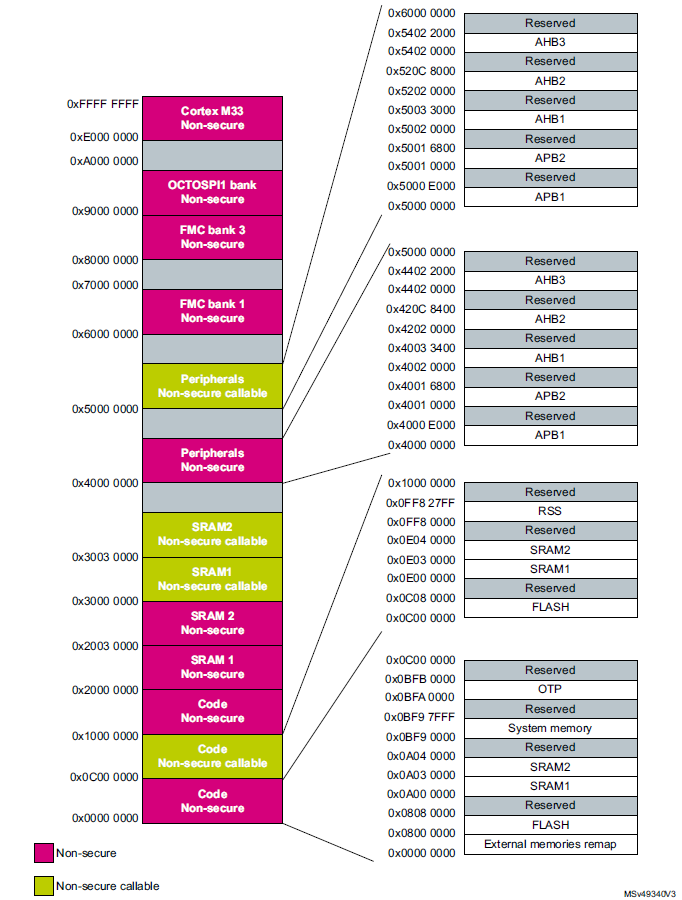 STMicroelectronics decided not to predefine regions in IDAU as secure, but only split memory into NSC and NS. This leaves the choice to the developer to further decide which of the regions should be attributed secure (S).

As mentioned in the basics chapter on TrustZone-M (see chapter 5), the division of secure and non-secure worlds is - in contrast to TrustZone-A - memory map based. That might be a little bit difficult to wrap the head around, so let’s look at an example how flash can be split up (the values are from example 1, see chapter 10.2):

You can address whole Flash in both regions. When the system resets and TrustZone is enabled, whole memory (including 1 and 2) is secure by default. The next step for the developer is to configure SAU to downgrade up to 8 memory regions to either NSC or NS. In the IDAU and SAU security attribution logic, the highest of both attributes wins (see chapter 5.5). If a developer needs to define a NS region, she needs to downgrade a region in the SAU, which was also defined NS in IDAU (for the Flash example, that would be 1).

The example downgrades two regions in the SAU for Flash:

Because the other alias for Flash (region number 2) is attributed NSC in IDAU, you can’t downgrade it further than to NSC, so you need to choose region number 1 to define a NS region.

Remember: On PoR, when TrustZone is enabled, whole memory is secure by default in SAU. This is configurable in the ALLNS bit of the SAU_CTRL register. (see chapter 8.2). This leaves the regions, which are not downgraded in the SAU, as Secure.

This results in the final mapping of the whole 512 KB flash you can see on the far right on figure 9.2.

In CMSIS the setup of SAU is done in the parition_<device>.h (see on GitHub). (see 8.2). The final Flash security attribution:

The Global TrustZone Controller is a block on a STM32L5, which contains subblocks and components relevant for system security configuration. There are 3 subblocks, which are described later in this chapter.

The importance of security on system level was already mentioned in chapter 5.7: On a system on a chip, the processing unit is only one actor in a complex system, the actors beeing interconnected on a bus system. In the STM32L5 there are 3 masters - two additional to the Cortex-M33 - which can issue transations on the bus and access peripherals, flash or SRAM. These are the DMA controller and the SDMMC controller. In the STM32L5 the security status of transactions issued by these masters are not filtered through IDAU and SAU configuration:

The SAU/IDAU settings are applicable to only the Cortex-M33. The other masters like DMA are not affected by those policies. [5]

To filter these transations either a security gate is added in front of the slaves or the slaves themselves are TrustZone-aware. When transactions from Cortex-M33 are initiated, this results in a transaction beeing filtered twice:

Other transactions, for example initiated by DMA master, are only filtered by the security gate in front of the slave.

The security gates in STM32L5 are configured through registes in the TrustZone security controller (TZSC). In STM32L5 the following peripherals have a security gate in front of them:

For STM32L5 the following slaves are TrustZone aware, which means they don’t have a dedicated security gate in front of them. This also means, that they are not configured in the logical block of the GTZC, but in dedicated registers in the realm of the respective peripheral.

Since Flash itself is TrustZone aware it does not logically belong to the GTZC. The security configurations for Flash are highly relevant for overall system security, so it does make sense to describe them in the current chapter:

The TZSC is the component on STM32L5 which configures the secure and privilege state of slave and masters on the bus, e.g. whether the slave is only available in secure and/or privileged state. This is done by configuring the different gates,- which are in front of TrustZone unaware peripherals (like the watermark based gate) but also the security wrappers, which are in front of masters to correctly attribute transactions issued by non-TrustZone aware masters. (see chapter 5.7.2).

You can find more details on the TZSC in chapter 9.5.1.

You can find more details on the TZIC in chapter 9.5.2.

The sub-block TrustZone Security Controller (TZSC) defines the security level of slave and master peripherals to secure or non-secure state but also to privileged or unprivileged. These settings are done in the following registers:

If you use the STM32CubeMX code generator to ramp up you project, you will find the necessary code to initialize GTZC in the function MX_GTZC_Init(void) in main.c. For TZSC it uses - depending on your configuration- the following HAL API functions:

See chapter 10.2.2 and chapter 10.2.4 for a example implementation, which uses STM32 HAL and the implemented GTZC TZIC callback to check an illegal access event.

The TZIC generates one interrupt for different events. To find out which event triggered the interrupt, TZIC provides different registers to filter. TZIC also provides means to mask events and thus disable generation of GTZC_IRQn per event.

SAU and IDAU are located in the core block and thus don’t report illegal events to TZIC. Violations of the SAU/IDAU security policy are reported directly to the core using a SecureFault exception. Sidenote: Armv8-M cores without the main extension (base only), don’t have a SecureFault and use a HardFault exception. For more details see the next level box above.

There are different security options available on STM32L552x:

If TrustZone is not enabled, there is no access restriction.

SRAM is not TrustZone-aware and thus has a block-based gate in front of it. Actually, there are two MPCBB (block-based memory protection controller) blocks: MPCBB1 is in front of SRAM1 and MPCBB2 in front of SRAM2. According to the logic determined in table 9.3 the respective configuration registers are located in GTZC and named accordingly:

Where x is 1 or 2 (for MPCBB1 and MPCBB2) and y is a register of 32 bit. There registers are reset to 0xFFFF FFFF, so whole SRAM is secure (when TrustZone is enabled). Security configuration of MPCBB can also be locked using the registers GTZC_MPCBBx_LCKVTRy.

The main block can be run into 1 or 2 banks (dual bank mode, DBANK=1 option byte). Dual bank mode offers the possibility to read on one bank, while executing on the other (Read-while-write (RWW)). The page size differ in each mode:

When TrustZone is enabled, Flash can be further protected by:

Write Protection (WRP) is configured in the option bytes FLASH_WRP1AR, FLASH_WRP1BR, FLASH_WRP2AR, FLASH_WRP2BR. The areas protected against write operations are configured relative to the flash base address. Details can be found in [5, p. 201].

Depending on the RDP level (0, 1 or 2) different protections are applied to flash. The default level is 0, which has no protections. See 9.2.1 for details on flash protections in each level. Additional details are available in [5, p. 203].

See chapter 10.2.1 for an example on SECWM_* configuration.

Watermarked areas can further be protected by Hide Protection (HDP). If a watermarked area in flash is further protected by hide protections, read, write and fetch on this area is denied until the next device reset. HDP is configured in FLASH_SECWMnR2 where n = {1,2}. These two registers contain two option bytes:

Additionally to the configuration in FLASH_SECWMnR2, the bit HDPn_ACCDIS in flash register FLASH_SECHDPCR must be enabled, to deny access to the respective HDP area. This register is not loaded from flash and used to enable HDP by the developer.